The efficiency of an ‘ideal’ transformer would be100% but in reality of course, this doesn’t exist because all transformers have losses.

Transformer losses comprise copper loss, coreloss and stray losses. As power levels of power transformers are now in the multiple MVA rating region, losses must be kept to an absolute minimum. Even 1% loss of a 10MVA transformer will result in a loss of 100kW!

CopperLoss–Copper losses would be eliminated if the windings were purely inductive,however as the windings are by nature a very long piece of wire–this will have a resistive component and as voltage dropped across this resistance it gives power lost as heat. This is often referred to as the I2R loss as Power =I2R.

Power transformers are used to transfer power from powerstation to substation;th ereason for this is that generation of power is very efficient at low voltages,while power transmission is more efficient at high voltages. This is because the ohmic losses(commonly known as‘I2R’ or ‘copper’ losses)are significant over long distances,so power is transferred at a higher voltage with corresponding lower current.

An additional benefit of reducing the I2R losses during transmission is that the conductor cross sectional area can be minimised. This does not come without the complications of handling high voltages,yet the advantages in efficiency outweigh the disadvantages of high voltage design.

Since copper loss equates to current flow raised to the power of two, this is the dominating loss with a full load test.

Core Losses (Also known as Iron loss comprising Eddy Current and Hysteresis losses.) With a fixed primary voltage, core loss can be considered to be constant and therefore this is the dominating loss with a no load test.

Magnetostriction and Mechanical Losses – Physical movement caused by the alternating magnetic flux in a ferromagnetic material and alternating magnetic fields causing force between windings cause heat and sound losses. There are relatively small and are usually excluded from loss measurements.

To measure these losses and determine a transformer’s efficiency requires a high accuracy precision power analyzer. This will illustrate the importance of certain aspects of transformer loss testing instrumentation and how the Newtons4th PPA series Precision Power Analysers have become the “Industry Standard” for transformer testing by providing an accurate solution to this field of testing.

Transformer power factor and efficiency testing with the N4L PPA5530 Power Analyzer
A 1:1 isolation transformer was tested and the results are shown in the following text, no load and max load tests were performed, short circuit tests were not carried out at this time. 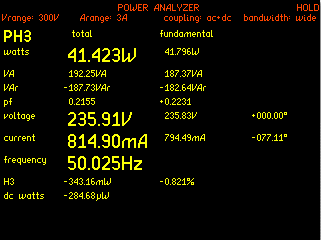 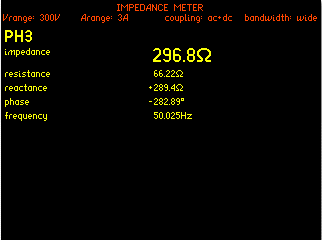 On Load testing
As illustrated the impedance presented on the secondary winding is reflected onto the primary (taking into account core loss components). In this test a resistive heater was connected to the secondary, this load has a power factor close to unity. We will see this reflected back onto the primary and the current vector will be “pulled” closer to the mains voltage vector, this is a result of the in-phase vector presented on the secondary tending to reduce the core flux which causes an increase in the primary current which will be 180 degrees out of phase with this secondary current but in phase with the primary voltage.
On load Primary Winding – N4L PPA5530 Power Analyzer readings 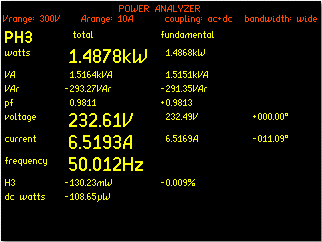 Now we have 1.4868kW, 6.5169A current and a power factor of 0.9811 (-11.09° phase angle) It must be noted that this is not quite a full load test, the transformer under test was a 1.5kVA transformer and we are testing at 1.4868kVA. In order to draw a complete vector diagram we can now test the secondary output, once the results are obtained we can now verify the theory that the impedance, the current and its respective phase angle in relation to the secondary voltage is reflected back onto the primary 180 degrees out of phase. We will also see the effect of the secondary current and its effect on the primary winding phase angle and power factor. 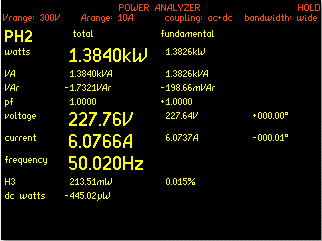 Notes See the Full Application for Transformer Testing
This is an extract from Application Note 18 available for free download from the Newton’s 4th website: https://www.newtons4th.com/applications/
Also available for download is follow up Application Note 35 – Low Power Factor Watts Measurement which is particularly relevant to transformer testing where power factors down to 0.01 are common and is another reason why the Newton’s 4th PPA Precision Power Analysers are preferred by most of the world’s leading transformer manufacturers.
Newton’s 4th Precision Power Analysers are available exclusively in Australia and New Zealand from Pacific Test Equipment.